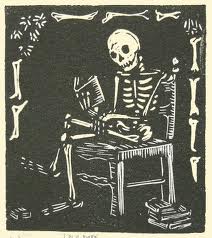 
Quite a peculiar thing happened to me the other night. I was minding my business, studying the second draft of my thirteenth novel, which I have carved meticulously into the wood of my coffin with a small piece of slate, when I heard a knock. I do not crawl up to the surface for anyone, let alone a stranger, but this knock sounded desperate, in need of something only I could provide. My curiosity peaked, I stretched my bones and began my six-foot rise to the earth.

Standing there, by the light of a single candle, was a writer in need of a review. I accepted the task and was handed a most unusual object that had me frightened at first and retreating back into the ground, back to my grave that has kept me for almost a hundred years now. The writer said, "Be still. Not to worry. It's just an iPad. You can read my book on it." My eye sockets squinted. I slid my phalanges across its soft surface. "Oh nice," I responded, and started reading where the writer instructed.

The novel, called Revamp, is about those beings that bump and bite in the night. Vampires. I was very well excited since I hadn't read a vampire novel since my own Dracula that was so successfully received, so many years ago.

I write today, on the seventeenth of April, in the year two thousand and twelve, to say that Revamp is a very good book indeed. I have heard hushed whisperings in the afterworld (no one wants to offend) of works of vampire fiction that have the un-dead and werewolves and fairies and humans all having relations and the news made my mandible twitch. Vampires with eyes the color of jaundice and skin sparkling in the sunlight like women's jewelry. Oh my. Revamp honors the traditional vampire, my vampire. I found myself sitting on the edge of my gravestone, a turn of the page too long to wait to find out what would happen next. The main vampire antagonist is devilish, his need for revenge all-consuming.

My only issue with this novel is that there aren't a lot of long treacherous journeys. And letters. And cargo. Now that I have come to the aid of a fellow writer, I must go on a long journey of my own. During some research on what I've been told is called "The Internet," I have uncovered a most horrible truth. I have lived dead and as bones for so long now, that family is just flesh-covered skeletons to me and I'm afraid I have no allegiance. Let me declare, I will die a second time over before my beloved Dracula becomes a trilogy.

Friends and neighbors, I bequeath this review.

I was delighted when my writer friend, Beck, came to call again and brought along that wonderment of modern technology. To see the iPad once more filled me with such pleasure, I was afraid I might burst. We seated ourselves atop the gravestones, I, on my friend Marvin’s and Beck on Griselda’s. Initial formalities concluded, Beck asked me if I would pose several questions about writing Revamp, and I obliged. The iPad was handed to me and the light of the full moon above suffered in comparison to the sweet light emanating from that odd, flat fruit. By God, how far man has come!

But without further ado, here is my conversation with Beck Sherman, transcribed for you on the modern marvel, the Apple iPad.

Stoker: “Beck, do tell me, have you ever read Dracula?”

Sherman: “Yes, of course. I loved it, which is why I sought you out. You’re a literary legend.”

Stoker: “Why, then, may I ask, did you give it only four stars? The internet revealed to me this truth, and to my knowledge, five stars is the best.”

Sherman: “No, you’re right, Mr. Stoker. Five stars is the highest rating, but four stars is still very, very good. I’ve actually only given five-star ratings to a few books—”

Sherman: “Um, offhand, I’m not sure I can recall—”

Sherman: “Okay, um…I think The Shining by Stephen King was one.”

Sherman: “Oh, no. He’s not actually a king. He’s just a regular guy who wrote, and is still writing, some really amazing horror books.”

Stoker: “Does he have travel and cargo and letters in his novels? Dracula has these things and is better for it.”

Sherman: “He does in some of them, yeah. So…I had a couple sample questions for you to ask me, just there—”

Sherman: “But, Mr. Stoker, where are you going? And why are you still typing?”

Stoker: “I’m transcribing. Recording everything is very important. Remember, my friend, that knowledge is stronger than memory.”

Sherman: “Van Helsing said that. To Dr. Seward, right? Listen, I really hate for us to part like this.”

Sherman: “Mr. Stoker, you can’t keep showing up on people’s doorsteps and scaring them into doing what you want. First Dacre, now Stephen King. Life doesn’t work like that.”

Stoker: “I’m not alive, I’m dead. Death works like that, my friend.”

Sherman: “You won’t be able to scare Stephen King into not writing! He’ll never stop writing!”

Stoker: “The best of luck with your book, young Sherman!”

Sherman: “Mr. Stoker? Are you still there? Mr. Stoker, I need my iPad back!”